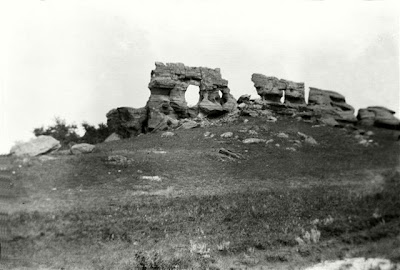 A mile south of the village of Roche Percee, off Highway 30, lies the massive landmark of sandstone known as pierced rock, or Roche Percee. The wind whistling through the many holes caused early natives to revere it and fear it. it also served as a benchmark - and one suspects as a calling card or bulletin board.

Hunters and early travelers out of Red River (Winnipeg) or Montana used it as a guide post and even General Custer and his famed 7th Cavalry stopped here once to inscribe their names for the future generations to read in eerie awe. 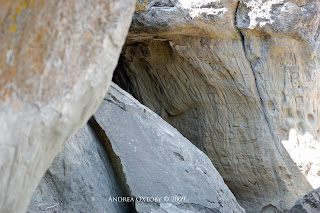 The rock itself was originally twice it's present size, but the erosive forces of wind, frost and rain have reduced it. the most important damage was done during a 1922 thunderstorm when lightning shattered the crown and knocked off the upper half. The mass of rubble thrown down contained many of the early Indian paintings.

Well we decided to take a road trip to check out this great Saskatchewan landmark and we were not disappointed. Tucked away in a rugged little valley the rocks poke out of the trees in the distance. My initial impression was that the stone formation have really shrunk from how they looked in the 1910 picture, which I posted above, but are still an impressive sight. 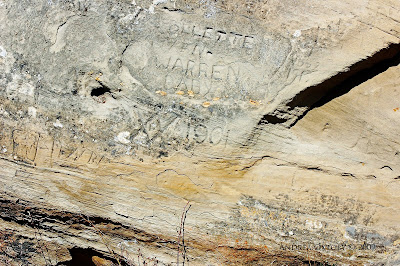 Climbing up we took a closer look at the scores of names and dates carved into the soft sandstone formations. The dates ranged from this year to all the way back to the 1800's. It sad to see all the really old carvings are being covered by the new but for the most part the writing is respectful without any lewdness. It is my understanding the majority of the native carvings were destroyed when the arch was hit by lightning.


Back behind the major rock formation is a number of other portions of rock in a wooded area. Some of the formations have small tunnels winding threw them as well as a larger cave-like tunnel. Past visitors have given the rocks a mystical reverence and walking amongst them I can understand why. Some have even said the rocks are haunted. This whole area is know for being haunted by beings know as "Rugeroos." Old Indian spirits that change into animals. They are vicious and will harm you if you don't leave when you see them. They don't speak but will growl. 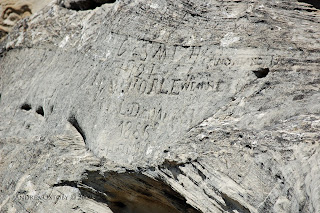 Investigating the site we did not feel any menacing presence or something that did not want us there. But we did have two strange experiences. The first was by my wife when I had returned to the car to fetch something. She was taking pictures when a shadow fell across her as if somebody was standing on the stone above her. She assumed I had returned and climbed up there but on standing up to look around nobody was around. The second encounter was when we were getting ready to leave. My wife went one way taking the dog with her and I went another way and lost sign of them. Just then I heard the heavy panting of an animal in my left ear and right away assumed my dog had decided to follow me. I turned around but nothing was there. Then it occurred to me the panting was right in my ear and my dog would have to riding on my shoulders to duplicate the noise. 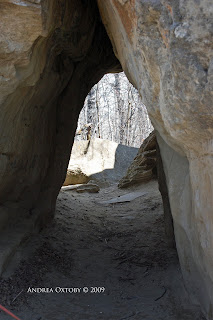 All in all it was interesting trip and we plan to return soon for another visit.
Posted by Lazyowl at 10:26 AM

I grew up in Roche Percee. I had visited the rocks many times, but I had a strange occurance one day. I was standing on one of the rocks with my younger brother behind me a few metres, and there was a bit of a field between the rocks where we were standing, and the other separate rock formations. I happened to glance over to the other side, and was terrified. Standing there, as real as my own left hand, was a cougar! I stood very still, and went to summon my brother to confirm what I had just seen to be true, but when I looked back, it was gone. I have never gotten out of a place as quickly as I did that day. As I ran, I kept looking for the animal that had terrified me so bad, but to no avail. It had seemed to me to have disappeared into thin air. I will never forget that day, and I can't say I have been back there since!

i to seen a strange animal there. at first if thought is was a grown deer. as i got closer the animal had the shape of a giant hyena. low back hips. hairy chest like a buffalo and a long dog type nose. i had the video camera beside me but was to amazed and didn't think of recording this beast.

another time 2 buddies and myself were parked in that area. it was a cold moonlight night. i got out of the car and walked to the back for a whiz. i heard cruching in the snow and i saw the figure of a man standing at the opposite rear corner of the car. i assumed it was one of my buddies. when i got back in the car they were both sitting there. i ask how they had beat me back into the car. they said they had never got out. we looked out to the rear of the car but there was nothing to be seen but bare land.

FRANK STARTED TELLING MY FATHER A STORY. HE MADE DAD PROMISE NEVER TO TELL ANYONE FOR FEAR THAT HE AND ANOTHER METIS FRIEND, LOUIS G., MIGHT BE LYNCHED BY THE LOCALS IF THEY FOUND OUT WHAT THEY HAD DONE. AT THAT TIME I WASN'T SURE IF THE STORY WAS TRUE OR FRANK AND MY FATHER WERE TRYING TO PUT THE FEAR OF THE DEVIL IN ME. HE BEGAN BY TELLING A SORY THAT HIS INDIAN GRANMOTHER HA TOLD HIM. THE BAND OF INDIANS SHE BELONGED TO HAD A GOOD SEASON HUNTING BUFFALO IN NORTH DAKOTA AND WERE PREPARING THIER WINTER CAMP ON THE NORTH BANK OF THE MISSOURI RIVER AROUND PRESENT DAY NEW TOWN N.D. A BAND OF MANDAN INDIANS ATTACHED THEM. THEY MANAGED TO REPEL THEIR ATTACH BUT ALL OF THEIR BRAVES EXCEPT THREE WERE KILLED.FEARING ANOTHER ATTACH THEY GRABBED A FEW BELONGINGS AND FLED NORTH. FOLLOWING SHORT CREEK THEY CAME TO THE SOURIS RIVER, WHICH IS PRESENT DAY ROCHE PERCEE, SASK. AS THE SNOW WAS GETTING TO DEEP TO TRAVEL THEY MADE CAMP ON THE NORTH SIDE OF THE VALLEY WHERE THERE WAS SHELTER FORM THE COLD PRAIRIE WING AND WOOD FOR THEIR FIRES. THEY SOON BECAME AWARE OF A LARGE MAN ROAMING THE VALLEY, WHICH THEY GAVE THE NAME "A LONE MAN". WHEN THEY TRIED TO APPROACH HIM HE WOULD MOVE OFF INTO THE DISTANCE. HE HUNTED WITH THE CUNNING OF A WOLF AND RAN DOWN HIS PREY WITH THE SPEED OF A DEER. WATCHING HIM,THEY DISCOVERED HIS DEN DUG INTO THE SOUTH BANK OF THE VALLEY. ONE DAY THE THREE REMAINING BRAVES SAW HIM ENTER HIS DEN. THEY APPROACHED THE ENTRANCE AND CALLED TO HIM. LIKE A CORNERED ANIMAL HE CAME CHARGING OUT, HIS YELLOW EYES AS BRIGHT AS FIRE, KILLING ONE OF THE BRAVES AND SEVERALLY INJURING ANOTHER. AS THE TWO REMAINING BRAVES RETREATED ACROSS THE VALLEY THEY WATCHED IN HORROR AS HE STARTED EATING HIS DEAD VICTIM. FEAR CAME OVER THE CAMP WHEN THE STORY WAS TOLD AND THEY CHANGED HIS NAME TO "YELLOW EYES". SEVERAL DAYS LATER THE INJURED BRAVE DIED OF HIS WOUNDS. FROM TREES THEY MADE A BURIAL STAND AND PLACED THE BODY ON IT. THE NEXT DAY THEY FOUND THE BODY HAD BEEN REMOVED AND DRAGGED THROUGH THE SNOW TO YELLOW EYES' DEN. AS THE COLD WINTER DRAGGED ON FOOD BECAME SCARCE. YELLOW EYES BEGAN CIRCLING THE CAMP, STOCKING THEM. FEARING FOR THE LIVES OF THE WOMEN AND CHILDREN, THE LAST BRAVE LEFT THE CAMP OF CONFRONT YELLOW EYES. HE TO WAS KILLED AND THE VILLAGE WATCHED IN HORROR AS YELLOW EYES STARTED TO EAT THE DEAD BRAVE'S BODY. OVER THE WINTER TWO MORE OF THE BAND MEMBERS WENT MISSING. WHEN SPRING ARRIVED THE VILLAGE WAS VISITED BY A LARGE GROUP OF HUNTERS FROM A FRIENDLY TRIBE TO THE NORTH. UPON HEARING THE STORY OF YELLOW EYES, THE HUNTER SURROUNDED HIS DEN. THEY COULD SEE HIS EYES SHINING IN THE DARK HOLE AND BEGAN FIRING SEVERAL BULLETS AND ARROWS AT HIM. AFTER A LONG PERIOD OF TIME THE GRUNTS AND MOANS FORM INSIDE THE DEN CEASED. NO HUNTER WAS BRAVE ENOUGH TO ENTER THE DEN TO SEE IF HE WAS DEAD SO THEY SEALED THE ENTRANCE WITH LARGE BOULDERS. THE REMAINING VILLAGERS PACKED THEIR BELONGINGS AND LEFT WITH THE HUNTERS TO A NEW HOME IN THE MOOSE MOUNTAINS. RUGAROO", LOUP-GAROU IN FRENCH, WHICH MEANS WEREWOLF. SINCE A WEREWOLF IS A MAN WHO EATS OTHER MEN, I STARTED TAKING THE STORY MORE SERIOUS.

Excellent story. Thanks for posting it. :)