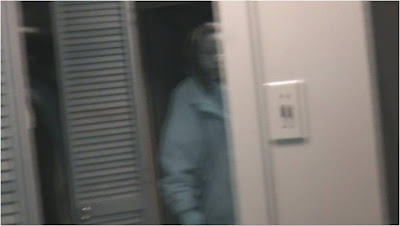 Call it an apparition, ghost or entity. Something is captured on video during a paranormal investigation of a house in East McKeesport, Pennsylvania.
Photo Copyright 2009 by Doreen Hill
Apparition Caught By Doreen
http://www.youtube.com/watch?v=0qcLzVsy50Q
Investigator Doreen captures an apparition. She was up on the second floor of a home, she was in a room by herself when this was caught.

Barb King is the founder of the PA. Dept of Paranormal Investigations or PDPI, a non-profit investigative team based in the Pittsburgh, Pennsylvania vicinity. She describes Doreen Hill as "a strong investigator with good skills," then adds, "I trust her totally."

One evening in March, 2009, Doreen Hill and a handful of researchers from the Pittsburgh Paranormal Society accepted an invitation to investigate a rental property in East McKeesport, Pennsylvania.

The mother and her two sons living there felt threatened. The family witnessed shadow phenomenon in the stairway leading to the second floor. Vile odors wafted through the residence. They began sleeping on the living room floor before finally retreating to a relative's house since they did not have anywhere else to go.
When investigators arrived, there was a "TERRIBLE" smell in the home. They asked the tenant to check her refrigerator to see if maybe something had gone bad... nothing.

Doreen escorted the mother upstairs to escape the stench, shoot video, and maybe run an EVP. Being somewhat "sensitive," she was drawn to a bedroom currently being used for storage. The mother returned downstairs to be with her children and to check on what everyone else was doing.

Doreen shot some video without incident.

Routinely checking what her Sony Handycam Hybrid DCR-SR45 had captured, her eyes more than likely popped out of her head reminiscent of some 1940's animated cartoon.

"I never saw that apparition in my view finder," Doreen explained. "After an hour or so, I wanted to check my video and that is when I saw her! I could not believe it and ran downstairs to show the tenant and the founder of the paranormal group what I caught. When I got downstairs, I found everyone in the basement because one of the investigators got pushed against a wall and they were making sure that she was okay."

We have three choices here:

1.) Deliberate hoax? Doreen Hill's integrity and her lack of technical savvy negate any hint of hoax.

2.) Mistake? To counter skeptical arguments that she merely recorded her own reflection or someone else in the house, Doreen says, "As far as the colors I was wearing....I know for a fact that I was wearing a black shirt with white lettering and jeans. The shirt I was wearing was the shirt I wore when I was with Pittsburgh Paranormal Society." This is no reflection or accidental capture of any living person present in that dwelling. The family is African American. No one in attendance dressed in the manner of this apparition. This is no orb or pareidolia.

3.) Real deal? Shawn Kelly, the Founder of the Pittsburgh Paranormal Society, states for the record, "The video is for real and it is a true apparition. It is the best piece of evidence out there to this day."
Posted by Lazyowl at 9:01 AM No comments: 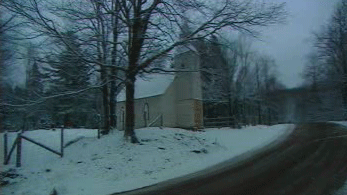 A 190 -year-old church in Quebec has become the target of ghost hunters amid rumours the building is haunted.

The 19th century St. John's Anglican Church in Gore, Que., has been plagued by unwelcome visitors of late, and both the church's warden and the Anglican diocese are considering abandoning it.Some of those breaking in are simply vandals, but others are doing more than just mischief. Spectre-seeking late-night crowds have begun congregating in the church after rumours it was haunted started to spread online.

Rumours were started on chat sites that at one time the church's congregation committed mass suicide. Although the stories had no basis in fact, they soon had supernatural thrill seekers and ghost hunters breaking in to the church at night. They've been performing seances on the grounds, trying to conjure up the spirits of the dead.

In the process, the ghost hunters are despoiling one of the few remnants of the 19th-century village of Shrewsbury, a Scottish and Irish settlement founded in the 1820s. The village, located within the modern-day municipality of Gore, disappeared over the last century because of disease and a lack of fertile soil.Jim Kyle, the church's warden, says almost every week another tombstone is desecrated or another piece of the church defaced.

"It sickens me to know that there are people out there with so little to do with their lives that this is what they take pleasure in," Kyle said.

Kyle's grandmother once played the organ in St. John's, but now it lies in ruins, along with the church's original furniture.

"They think if they do this they'll anger the ghosts, and the ghosts will come out," Kyle said.

The Anglican diocese is preparing to deconsecrate St. John's Church, putting an end to Anglican services there.

"It's sad. It feels in a sense like we got defeated.... We've had to give up after almost 200 years," said super archdeacon Edward Simonton, a rector in Rawdon, Que.

But the community of Gore hasn't lost all hope. The community plans to apply for provincial funding to restore St. John's as a non-denominational church where people can still hold baptisms and weddings.

Gore is about an hour's drive north of Montreal.

Posted by Lazyowl at 3:14 PM No comments: 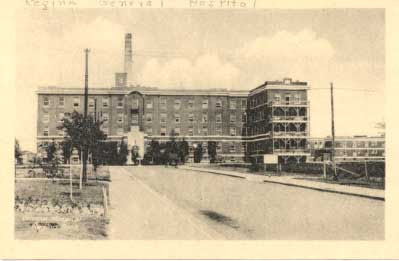 The Regina General Hospital began construction in 1909. Originally, the building had a 100-bed capacity, cost over $100,000 and took two years to complete. Additions were built onto the main structure in 1913 and 1927, upgrading the facility to a 410-bed capacity. Additional construction took place in 1949, upgrading the building's capacity to 800 beds - and again in 1966, with a final addition constructed in the late 1990s. 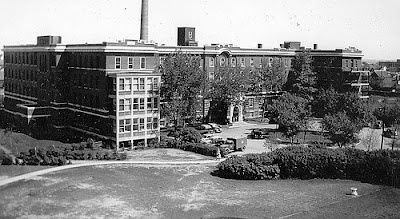 There are a number of reported spirits haunting this hospital. Many people have seen an elderly nurse who rushes around the hallways of the hospital at speeds not humanly possible. There has also been many reports of people seeing a lost little boy wandering the old wing of the hospital and then suddenly disappearing. Some people have also claimed to see the ghost of an older nurse standing behind them but when they turn around she disappears.

Posted by Lazyowl at 2:21 PM No comments: 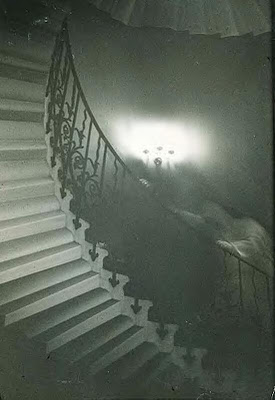 Ancient footfalls often resound in the Queen’s House at the Naval College in London. Nothing is known of the hooded figure climbing the steps aside from his apparent grief and the glimmer of a ring on the first or second finger of his right hand.

Taken in 1966, Reverend Hardy and his wife used time-lapse photography, perhaps in an effort to capture an image of the ghost, on the unused staircase. Off limits to the public, the staircase was barricaded to prevent visitors from wandering about; I guess no one thought to tell the ghosts… After the photo was developed and the images found, it was examined by photographic experts, including Kodak, for its authenticity. Further attempts to duplicate it using props and actors yielded disastrous results, leading experts to conclude that the photo is genuine and there’s some creepy thing crawling up the stairs at the Naval College.

Posted by Lazyowl at 1:32 PM No comments: