Possibly the best documented skinwalker beliefs are those relating to the Navajo yee naaldlooshii (literally "with it, he goes on all fours" in the Navajo language). A yee naaldlooshii is one of several varieties of Navajo witch (specifically an ’ánt’įįhnii or practitioner of the Witchery Way, as opposed to a user of curse-objects (’adagąsh) or a practitioner of Frenzy Way (’azhįtee)). Technically, the term refers to an ’ánt’įįhnii who is using his (rarely her) powers to travel in animal form. In some versions men or women who have attained the highest level of priesthood then commit the act of killing an immediate member of their family, and then have thus gained the evil powers that are associated with skinwalkers.

The ’ánt’įįhnii are human beings who have gained supernatural power by breaking a cultural taboo. Specifically, a person is said to gain the power to become a yee naaldlooshii upon initiation into the Witchery Way. Both men and women can become ’ánt’įįhnii and therefore possibly skinwalkers, but men are far more numerous. It is generally thought that only childless women can become witches.

Although it is most frequently seen as a coyote, wolf, owl, fox, or crow, the yee naaldlooshii is said to have the power to assume the form of any animal they choose, depending on what kind of abilities they need. Witches use the form for expedient travel, especially to the Navajo equivalent of the 'Black Mass', a perverted song (and the central rite of the Witchery Way) used to curse instead of to heal. They also may transform to escape from pursuers.
Some Navajo also believe that skinwalkers have the ability to steal the "skin" or body of a person. The Navajo believe that if you lock eyes with a skinwalker they can absorb themselves into your body. It is also said that skinwalkers avoid the light and that their eyes glow like an animal's when in human form and when in animal form their eyes do not glow as an animal's would. 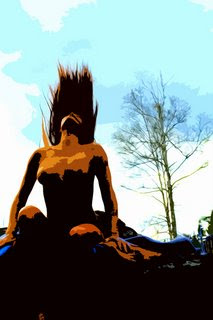 A skinwalker is usually described as naked, except for a coyote skin, or wolf skin. Some Navajos describe them as a mutated version of the animal in question. The skin may just be a mask, like those which are the only garment worn in the witches' sing.

Because animal skins are used primarily by skinwalkers, the pelt of animals such as bears, coyotes, wolves, and cougars are strictly tabooed. Sheepskin and buckskin are probably two of the few hides used by Navajos; the latter is used only for ceremonial purposes.

Often, Navajos will tell of their encounter with a skinwalker, though there is a lot of hesitancy to reveal the story to non-Navajos, or (understandably) to talk of such frightening things at night. Sometimes the skinwalker will try to break into the house and attack the people inside, and will often bang on the walls of the house, knock on the windows, and climb onto the roofs. Sometimes, a strange, animal-like figure is seen standing outside the window, peering in. Other times, a skinwalker may attack a vehicle and cause a car accident. The skinwalkers are described as being fast, agile, and impossible to catch. Though some attempts have been made to shoot or kill one, they are not usually successful. Sometimes a skinwalker will be tracked down, only to lead to the house of someone known to the tracker. As in European werewolf lore, sometimes a 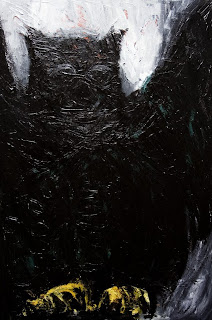 wounded skinwalker will escape, only to have someone turn up later with a similar wound which reveals them to be the witch. It is said that if a Navajo was to know the person behind the skinwalker they had to pronounce the full name, and about three days later that person would either get sick or die for the wrong that they have committed.

According to Navajo legend, skinwalkers can have the power to read human thoughts. They also possess the ability to make any human or animal noise they choose. A skinwalker may use the voice of a relative or the cry of an infant to lure victims out of the safety of their homes.
Some tribes believe that skinwalkers and other witches can use the spit, hair, or shoes and old clothing of a person to make curses that will attack that specific person. For this reason many Navajo will never spit or leave shoes outside. They also take great care to see that any hair or nail clippings are burned. Children are advised that if they urinate outside to kick dirt over the spot so that a skinwalker cannot use it to make a curse against them. (above taken from "Wikipedia". )
Posted by Lazyowl at 12:16 PM